Drawing from the blues, rock, and thrash, the smoky, soulful vocals of frontwoman Brenna Leath ride the lightning of the band's direct, muscular rhythms and torrid guitar riffs.

“Hard-driving rock fronted by a fiery-haired gal, belting out vocals that can shred as mightily as a guitar solo.”

"Raleigh's The Hell No might be the cure for your frenzied mind. This is a hard rock band that doesn't try to be anything more: Some passages march through Sabbath-esque gloom, while others churn and strut like Billy Idol. The Berklee-educated Adam Johnson shreds with a tuneful touch, keeping the band's tried-and-true patterns from feeling too clunky, and singer Brenna Leath scorches songs with her deep, gritty voice. They always sound like their only real motivation is to have a good time."

For more press, visit our ReverbNation.

“The Hell No launched into their set with “Smokin' Gun” and “Please Don’t Go.” The crowd... was immediately rocking along with the band. Singer Brenna Leath’s vocals are a force to be reckoned with as evident in the slow and sultry “Cherry [Blossom].” The rest of The Hell No's set was filled with songs about good and bad relationships and everything that goes along with them. “The Right Thing,” as introduced by Brenna, is about telling the truth even when it’s hard to do. Ash Lopez on bass, Adam Johnson on guitar, and Dave McDonald on drums were a well oiled machine. The rhythm section provided a solid platform for Adam’s impressive guitar work to build on.”

“A bit like a female-led Motörhead in their best moments, Raleigh’s The Hell No burn through thick rock ’n’ roll crude. The rhythms drive as riffs slice through the fray. But singer Brenna Leath is the X factor, with a voice that marries Janis Joplin’s semi-operatic range with Danzig’s lecherous charisma. She’s a boundary-obliterating force that elevates The Hell No.” 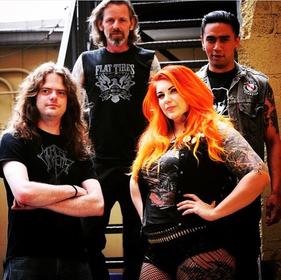 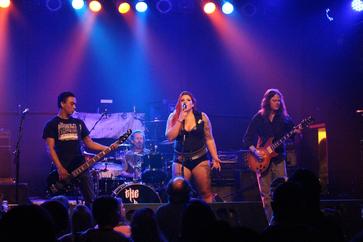 Raleigh hard rock outfit The Hell No has a balance of brawny blues metal and classic rock hooks that mines a sweet spot between Danzig’s dark riffs and Heart’s heavy pop.